To attack a nuclear power plant, or even the threatening nuclear facilities, is against the UN Charter. Unfortunately, it is not unprecedented in history, but few such events have been witnessed.

In 1991, at the time of the break-up of Yugoslavia, after Slovenia had declared its withdrawal from Yugoslavia, fighter jets from the Yugoslavian central army flew - threateningly - at low altitude over the Krsko nuclear power plant in Slovenia, after which the operators decided to reduce the power output of the single-unit nuclear power plant and later, as the fighting intensified, to shut it down. Fortunately, the plant was not directly attacked.

In 1982, French anti-nuclear environmental activists fired anti-tank shells at the containment building of the Superphenix reactor, also under construction. The building survived the terrorist attack without serious damage.

The thick concrete structures and robust design of nuclear power plants provide a degree of protection against external attack, but these civilian facilities are typically not designed for military attack and could be seriously damaged by a large-scale targeted attack. Some reactors (especially the Generation 3 reactors) are designed to withstand airplane crash impact, which also provides a serious protection against other types of projectiles. 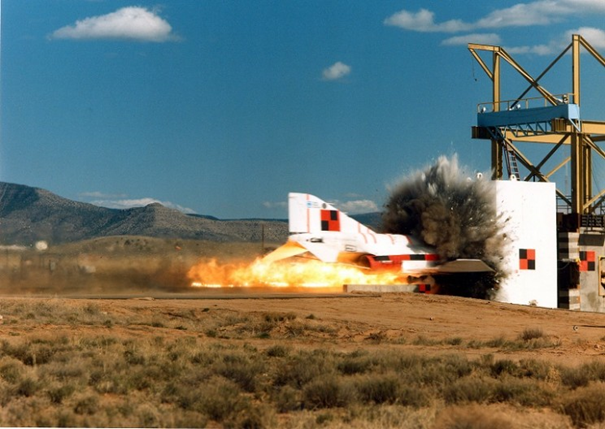 In 1988, the Sandia National Laboratory in the US conducted an experiment in which an F4 Phantom fighter jet was crashed into a concrete wall segment corresponding to a nuclear power plant containment building wall. They investigated the behaviour of the flying body and the wall during the impact. This experiment provided important data for several subsequent numerical simulation studies.

Footage from 4 March 2022, according to information published in the international press and confirmed by several official sources, including the International Atomic Energy Agency, shows advancing Russian troops occupying the Zaporizhzhia Nuclear Power Plant site in Ukraine, during which a training building was hit and burned for hours.

The attack is a serious violation of international conventions and of all the principles that we in the nuclear profession stand for.

In 2009, the UN International Atomic Energy Agency's General Assembly reaffirmed a resolution stating that „any armed attack on and threat against nuclear facilities devoted to peaceful purposes constitutes a violation of the principles of the United Nations Charter, international law and the Statute of the Agency”.

The attack is particularly painful because Russia has been a respected member of the international nuclear community in recent years. Russian experts and Russian companies are involved in many international nuclear organisations, and they are involved in many international projects, including the preparation and implementation of nuclear power plant construction in Europe, Asia and Africa. The nuclear power plants in Ukraine were built in Soviet times, but on the basis of Russian designs and under the supervision of Russian specialists.

A few days ago, I said to my colleagues that every day that Russia spends in this war, is pushing itself back a decade in the history of advanced civilisations. According to my model, this way, on the 8th day of the war, it could be somewhere in the 1940s or 50s. Shocking, disturbing and unimaginable.

And what was the master plan, how will we be able to physically protect nuclear facilities if a nuclear superpower like Russia does not respect the basic principles of nuclear safety and security?

We are speeding backwards in time - my point is that every day spent in this war is about a decade back in history. On the 8th day of the war we are somewhere in the 1940s or 50s. You can smell the naphthalene. It's upsetting.

Let's stop the shooting and the bloodshed and start thinking with a clear head!

All parties involved need to think!

According to the information provided by the Director General of the International Atomic Energy Agency on 4 March 2022, the operational status of Unit 6 of the Zaporizhzhia Nuclear Power Plant in Ukraine is as follows. The radiation situation around the units is normal and there is no damage to the technological systems.

The condition of the units is normal:

It can be seen that whereas in the previous days 3 units were operating on the site, now only one unit has been left in operation, obviously to maintain essential power and steam generation functions on-site. The steps taken by the operators so far are logical.

If attacks on uncomplete or non-operational nuclear facilities count, Israeli airstrikes on Iraqi (1981) and Syrian (2007) targets should be added to the list.